Keeping You and Your Clients Safe

Who doesn’t like ratings—Yelp for restaurants, Amazon for just about any conceivable product, Consumer Reports for cars and major home appliances, Angie’s List for builders and other service providers? Whatever the product or service, consumers love to peruse information that gives them the ability to buy with confidence . . . or walk away from a bad deal. 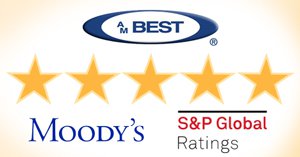 Same is true for insurance of all kinds. Consumers, insurance agents, financial planners, investment advisors all rely on insurance company ratings to make sensible decisions about which insurance companies to do business with or to recommend. But insurer ratings are especially significant when it comes to errors-and-omissions (E&O) insurance. Here are four reasons why:

For the above four reasons, having a solid knowledge of insurance-company ratings will not only help you purchase high-quality E&O insurance that will be there when you need it, it will also help reduce your risk of getting sued in cases where a company you recommended to a client goes broke.

What should this knowledge entail? The starting point is knowing which rating systems are available and how they work. Then it’s important to decide for yourself which ratings will disqualify a company in your eyes, all things being equal.

With that, let’s briefly look at the major ratings firms and their rating systems.

A.M. Best Company: A.M. Best Company ratings are considered the gold standard. It’s no surprise why. The company has been evaluating insurance companies for more than 100 years and has a sterling reputation for independence and credibility.

Standard and Poor’s: S&P has an even longer track record than A.M. Best, being founded in 1860. It also has a broader focus than A.M. Best, providing financial market intelligence on many different kinds of firms and industries, with a focus on credit worthiness. Although its credibility took a hit after it inaccurately rated the financial instruments that caused the 2008 global meltdown, it has recovered ground by tightening its standards and procedures.

The top S&P ratings are:

The top Moody’s ratings are:

Although there are several other ratings agencies, including Fitch, Weiss and Demotech (for P&C companies), another service places the major ratings on a single 100-point scale. With this system, you can compare ratings based on a common percentile scale. The higher the percentile, the higher the overall rankings from all the rating firms. In other words, an insurer with a 90% Comdex rating has a stronger composite rating than 90 percent of all insurers with ratings.

How to make sense of all these insurer data points? The key is to not get stuck “in the weeds.” Here are some tips you might find useful.

In summary, insurance company ratings are crucially important when it comes to both buying and keeping your E&O insurance. If you know how to do your carrier due diligence—using ratings to help buttress your judgments—you will be well-equipped to select a great E&O policy for yourself and to avoid E&O disputes with your clients. You will also have fewer headaches securing and maintaining your carrier and marketing organization appointments. Carefully reviewing insurance company ratings will always pay big dividends in terms of building a successful, sustainable low-risk business going forward.